Fresh from a long and well earned sleep, after our previous day’s exertions, wandering around the high, hill top castle of Arraiolos, we wandered over to the other side of the road, where our hostel had its breakfast laid out. Hostel breakfasts can range from out-of-this-world to get-out-of-my-life, so it was good to arrive and find a range of fruit juice, a coffee capsule mahine for REAL cofffee, breads, cheeses, ham, sausage, jam, butter, cereal and more besides. We sat in the little courtyard outside and thoroughly stuffed our faces, preparing as we were for a much heavier day, in terms of walking, that day. Faces filled, it was time for a quick shower and then off to the bus station and, in fact, the same stop even, to wait for the bus to Estremoz.

The city is a fair bit further from Évora than Arraiolos, sitting some 51 kilometres away and is a mere twenty from the Spanish border. While all of the castles in the region had a role in protecting Portugal from the Spanish at various points in time, we had a feeling that this one might have been more significant. The bus rolled out of the station more or less exactly on time and we were again amongst a huge group of about six total passengers on board. The route followed the Arraiolos route and then veered off, following signs, mainly, for Espanha.

A fairly rapid fifty-five minutes later, we were hopping off the bus and in Estremoz. Rather than the castle dominating the skyline where we disembarked, instead was a towering cement factory. Luckily, that seemed to be nowhere near where we were going, so we jumped off the bus and crossed the road to find an interesting and unusual looking square building, adorned with beautiful azulejos and the name of the city. It took us a few minutes to realise that this was an old train station. A cursory look at Portuguese wikipedia told us that the station had been built in 1902, and had been in use until 2011, when it was decommissioned. It was pleasing, though, to see that they’ve kept it in such great condition since. 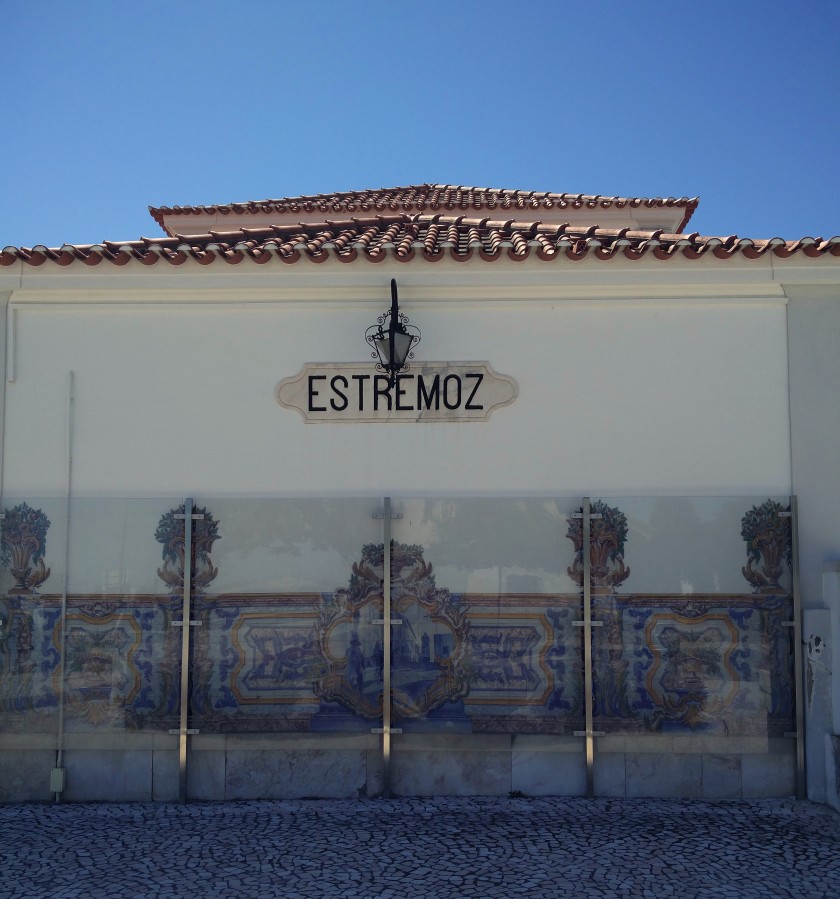 After taking in the building, it was down the road towards the town and a quick stop off to get more coffee and a cake. While in Alentejo it’s always a good idea to get a queijada. Though it literally means cheesecake, it’s nothing like a cheesecake, at all. It’s simply a cake, heavily egg based (naturally, in Portugal!), with the quark from cheese added. It’s light, sits in a firm pastry case and is quite delicious.

Turning the corner from the street with the bus station at the end, you come to a large square. There’s a section in the middle with a water feature, a small garden and a café with terraces. To the left though is an historic building which has been converted into a science centre, with sections for astronomy, natural history and more. We decided to take a look. The brilliant thing is that it’s been preserved so well, so the old features are really present and a part of the experience of visiting the place, including a lush courtyard in the interior of the museum and really cool medieval gargoyles. Almost superimposed on top of it, there are star charts, dinosaur skeletons and lots of other exciting science and nature-based elements. It must be a fantastic place to take kids, as there are lots of interactive exhibits, too. We didn’t have time to see the museum, so we decided not to go into the main exhibit, but I’ve definitely mde a mental note to return. You can find out about it here (in Portuguese). 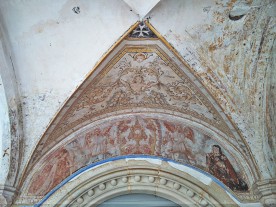 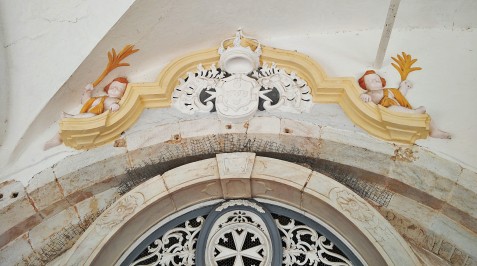 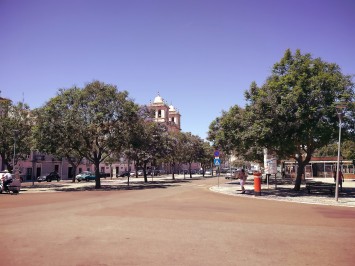 Walking across the street, we saw a small food market, selling locally grown produce. I didn’t want to take any photos, as I wasn’t buying, but all of it looked terrific. Across the road was the town hall and now also town museum. In keeping with the spirit of the interior part of the Alentejo in mid summer, the sign on the door, in Portuguese and English, advised that in summer afternoon opening would be “erratic”. The building itself was quite attractive and had a fabulous coat of arms on the wall and more azulejos on the portal to the building next door. 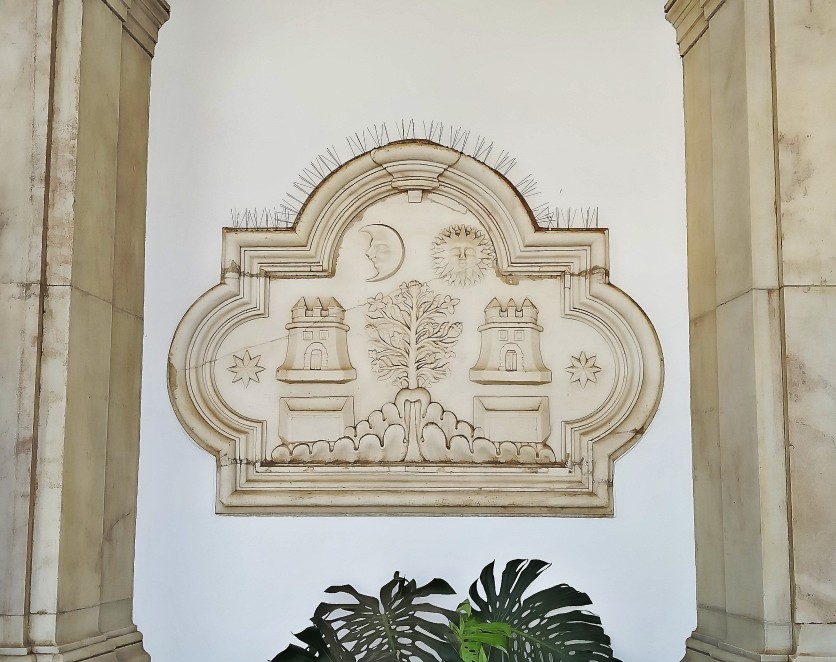 After this, we only had to walk across one more square before we were standing at the edge of the castle walls. Where Arraiolos had been a town that had developed twenty metres or so below the old castle, Estremoz was something entirely different, in fact being a city that still lived and breathed within the castle and then nestling right up against the towering castle walls, too. As we approached the city walls, passing another local produce market, we came out alongside the defences, with a drop down to the farmland stretching out from the edge of the city and running all the way to the horizon. We stopped for a few photos and then went in to the castle through one of the arched gates. 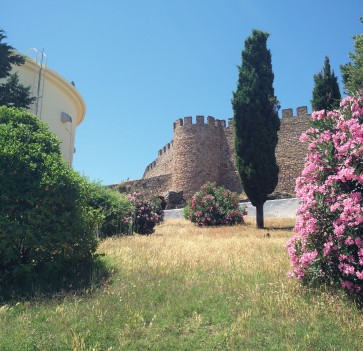 Once inside the castle walls, we walked up the narrow street past the 700-year-old buildings – including the old prison, which has been turned in to a bar restuarant with a roof terrace – and then arrived at a huge, imposing tower, connected to a courtyard, with a wall facing out towards the countryside. In the middle of the square is a statue to the saint, queen isabel. In the tower there is now a pousada, one of the traditional hotels, originally set up for coachmen crossing the country in the middle ages. The pousada hotel looked wonderful and has rooms in the main tower which have what must be quite staggering views over the city. I made a note to stay there some time in the future. The castle keep is in remarkable condition and the surrounding buildings, too, look incredible for their age. There is even an adega with a huge collection of wines within the inner walls. Opposite is one part of the castle which has been allowed to decay, but it looks dramatic, nonetheless.

We decided to walk out of the inner gate and go to the viewpoint at the other extremity of the outer walls. When we got there there we found a beautiful church and stopped to take in the views. Walking back from here, we discovered a group of men and women sitting at a snack bar, drinking beer and sheltering from the sun in the shade. We decided it wasn’t a bad idea and went inside to join them. 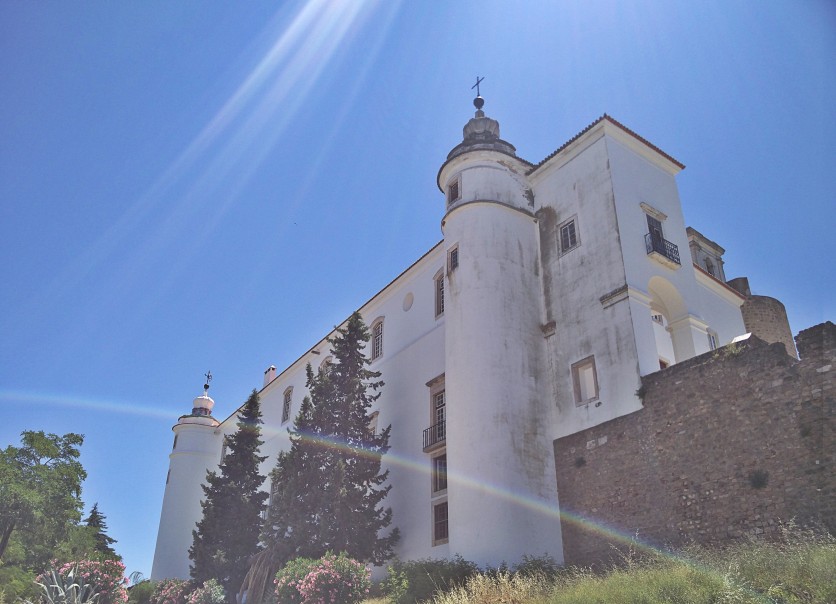 The castle is quite amazing, largely because so many people actually still live their lives within the city walls. This is not unique in Portugal and, of course, Obidos is the most famous other example of such a place, but the big difference here is that this really doesn’t feel so much like a touristy place. It’s strange when you consider that the fortress had an important role in Portuguese history, with Vasco Da Gama himself once stationed here as a general in the defence against the Spanish.

After visiting all areas of the castle and having our beers to cool off, we decided it was about time for lunch. We took a walk around and found a sign, just outside the main gate, for a traditional restaurant offering local specialties. We decided to give it a try and were very glad that we did. My friend ate a bean soup, which came with what looked like a whole loaf of bread, while I had an açorda alentejana, with cod and egg. It’s a kind of thin soup with lots of herbs, a huge slab of bacalhau floating in it and a poached egg to keep it company. Again, there was abundant bread, olives and we picked up a half litre of local white wine. With coffees to follow, we managed to spend 16 euros, which was phenomenal value. Afterwards, as I paid the lady in charge, I asked if we was the chef and she replied that she was in fact the owner and had been running the place for more than 30 years. If you find yourself in Estremoz and needing something to eat, I would strongly recommend the Casa do Pixanegra. 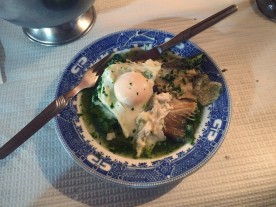 With lunch eaten, there was little more than an hour to wander around the city before our bus back to Évora. So we wandered the narrow streets, my friend looked for a souvenir and, finally, we whiled away some time in a café in the town square, where I found a most disturbing looking statue of what looked like a young boy.

All in all, Estremoz had been a really worthwhile place to visit, packed with history and, more importantly perhaps, living history, as so many people were still living out their daily lives within the castle walls. I think, because of the isolation, it’s not somewhere I’d want to live, but it’s a really exciting and beautiful place to visit. Finally, on the way home, we spotted something we’d not seen too clearly on the way out on the bus, that being another castle, this time at a place called Évoramonte. So that one is on the list for the next time, along with Marvão and more besides. Watch this space for when I make it to them. For those readers who have made it over to Portugal but haven’t been to Alentejo, I implore you to take a look. It’s my absolute favourite and the slightly lower levels of tourism to the Lisboa region and the Algarve make such a difference.

If you’re planning your own trip to the Alentejo region, take a look at the Rough Guide to the area for Kindle, here:

I'm a late-30s English language teacher and writer of dark fiction from the UK, living in Lisbon, Portugal. Ireally enjoy travel, both for the sake of the places I travel to and for the journey itself. I previously lived for 3 years in Poland where I tried to take the opportunity to see as much of Central Europe as I could. View all posts by Kev Harrison

Save €15 on your first stay with booking.com

Get free credit when you sign-up at Air BnB

I'm a late-30s English language teacher and writer of dark fiction from the UK, living in Lisbon, Portugal. Ireally enjoy travel, both for the sake of the places I travel to and for the journey itself. I previously lived for 3 years in Poland where I tried to take the opportunity to see as much of Central Europe as I could.

Looking for something or somewhere specific?

Find me on Bloglovin’