It’s probably clear from the various contents of these pages that I have what you might call a healthy interest in food. Some might call it a gluttonous obsession, but let’s save the character assassination for another day. While scrolling down my Facebook feed a few months ago, there was a list of “Pages you might be interested in.” Typically, the majority of these were for mail order Russian brides, some god awful musicians that would make me feel quite ill and there, shining like a beacon on the right hand side, was Street food fest. It’s a new concept here in Portugal, but one which I expect will expand rapidly, if this first example is anything to go by. Of course, on any of the big bustling street corners of downtown Lisbon,you can find stalls selling churros or farturas, but this idea of a whole festival devoted to street food is something new. I immediately decided I would go and clicked the little ‘like’ button.

Being someone who takes a over enthusiastic approach to things, I naturally didn’t bother to look into exactly where the festival was until much closer to the date, whereupon I discovered it was up near a port city called Figueira da Foz. A bit of quick research taught me that it was easily accessible from Lisbon and that a coach departed at a convenient time, right after my colleagues and I finished our Saturday morning work. Ideal. Accommodation was booked opposite the festival, bus tickets were reserved, and I – along with a couple of food appreciating colleagues – were to be off.

The day came and, speeding from my school on the metro to the bus station at Lisbon’s Sete Rios (opposite the zoo), we boarded the very comfortable Rede Express bus, and off we went.

The route north out of Lisbon was lovely. The roads relatively new and tolled, meaning that there was little traffic and I was able to nap for much of the journey. The rest of the time was spent looking at the lush green countryside passing by, birds of prey soaring in circular patterns, and the interesting looking medieval town of Leiria, where we made a brief stop off. After a few hours, we were dropped off at Figueira’s bus and train station. We were almost there. 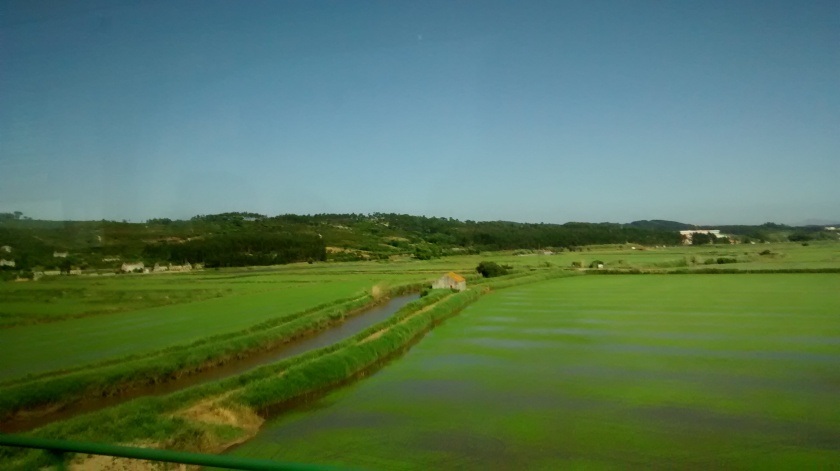 At home, I had been sufficiently convinced by google maps that the destination for the festival, Quiaios beach, was within about 3 – 5km of Figueira itself. So we took out some cash at a petrol station and hurriedly hailed a cab. Some 20 minutes of speedy cab ride later, and we were rounding the last corner into the dusty drive of the Quiaios parque campismo. We walked in to the park and found people busily cleaning up reception. A lady called Sofia was extremely helpful in humouring our ill-formed Portuguese, before deftly changing to English as we were about to hit a brick wall. She showed us to our rooms, in a narrow hotel block which were unglamorous, but perfectly good for the asking price of 25 euros for a twin for the night. Across the way there were some odd looking toy town style houses, which we all admitted we’d rather be staying, but such is life. 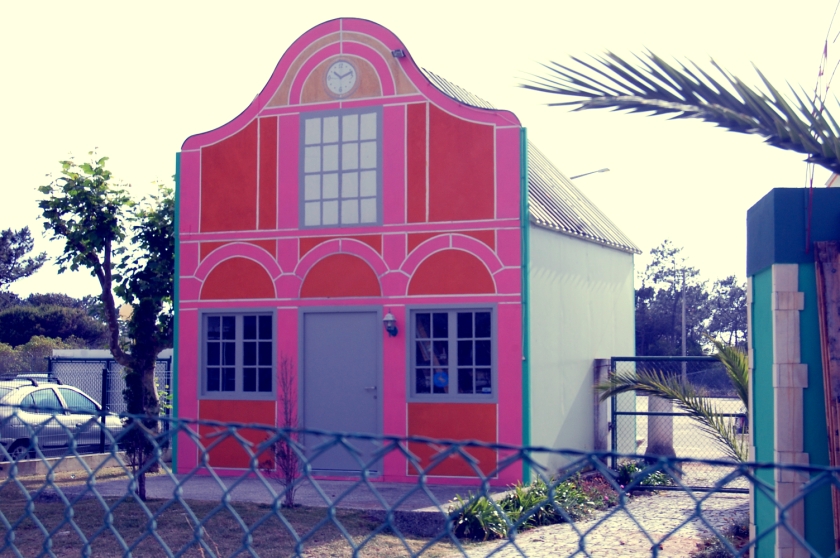 With our bags dropped and our faces freshened, it was time to walk back down the dirt road to the food festival itself. Inevitably taking a wrong turn, we ended up on a long stretch of road alongside the beach, where we realised just how close to the mountain range Serra da Boa Viagem we were. Very close indeed.

After a bit of self-correction and a couple of turns, we found ourselves at the fest. It was already quite busy with people and a brass and drum band was playing pop songs in an upbeat and amusing way. The ambience was right, now time for the food. We started off with what turned out to be my favourite stall of the weekend – Sustainable Street Food. These guys were all about making high quality, fast food, with a limited menu, but providing a balanced meal in each case. Between us, we got through the vegetable fava – a curried twist on a famous, old fashioned Portuguese meat and bean stew, a deluxe prego, which involved marinated steak, rocket leaves, homemade chutney and shave parmesan on artisan bread and the veal rib sandwich, which involved chilli, rocket leaves, marinated veal met from between the ribs – extra tender, creme fraiche and a good squirt of extra hot pepper sauce. All three were excellent. This was all washed down with very cheaply priced Super Bock beer or a morangoska in the lady in the party’s case.

After a pause to gather our thoughts, it was time to find out what was next. We considered a burger. We thought about a wrap. We even looked longingly at Porto chips. But then we came across a hot dog stand with a sign saying “cachorro francesinha.” The francesinha is a Portuguese sandwich that involves steak, ham, sausage, chorizo, cheese, bread, beer and meat or fish based sauce, a fried egg on the top and a second plate for chips. It’s so much that I generally only allow myself one every three months or so. So I had to ask what was in it. It was:

A hot dog, chopped chorizo, chopped bacon. The bun was then forced to close in a panini press, before cheese, and francesinha sauce were added. Finally, there was a tray with a space for crispy onions and finger chips. Clearly, we had to eat it. It was delicious, and made me feel like I would certainly live a few days less for the experience.

After that beast, it was time for a break from the eating, so we took a walk, with some more beers, down to the beach. It was a little cloudy, but it was clearly a really beautiful stretch of sand. The proximity of the mountains to the sea meant that cloud was constantly rolling down from the peaks to the beach so that, even on a fairly warm summer’s day, you could find yourself walking in cloud on the beach. 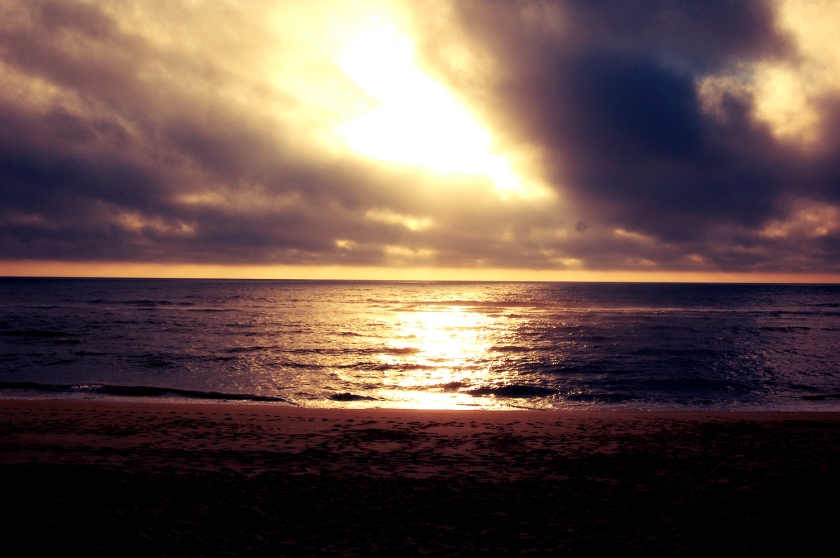 Returning to the food fest, without our appetites restored, we stood by and watched as a local man proposed to his girlfriend with the help of the band (she said yes) and prompted uproarious applause and joyfulness, which coincided rather nicely with the opening of a stall ran by a man called Master Gin. Not wanting to take claims of mastery for granted, we dashed over to see what he could do. We each had a different gin, with a different accompaniment and all three of us were very happy. It was very dark by now, and we sat, listening to the music from the DJ, talking, sipping our gin drinks and eating chocolate iced orange love cakes from a vegetarian bakery until it was time for sleep. More accurately, it was time to listen to the mating call of frogs in the area for about an hour and then sleep.

In spite of the frog orgy, I managed to get an excellent night’s sleep and woke up to find a cool, crisp, but sunnier day, and we quickly sped off to the festival site to find some breakfast. The festival was closed til 11 though and, an hour short of that time, we decided to stop in the nearby café bar and deal with our breakfast needs. Galãos were drunk, pastries were eaten and time was passed until the festival gradually came back to life. After a brief hiatus, we returned to have a go at the gourmet burger van, Mister Pig. We scoffed our way through a burger with cheese, bacon, ketchup, mustard, excellent bread and some salad. After that, we decided to go back to the beach for a walk in the sunshine, after the previous day had been fairly gloomy.

After a good hour of walking down this lovely, deserted beach, we moseyed back for one final meal, me going for a country chicken taco from the first van of the weekend, while my companions opted for the oat based cheesecake. After that, it was time to head back, so we called a cab and made the journey back down to Figueira da Foz. Once there, there was an hour before the guys got their bus, so we stopped in the station café for a beer, where the lovely barmaid was really helpful. Then, after the guys left, I went for a look around the town. I got the impression it’s quite an industrial town, from the heavy machinery in the port and from the real absence of people walking around on a Sunday. It took me half n hour to find somewhere to buy a sandwich! 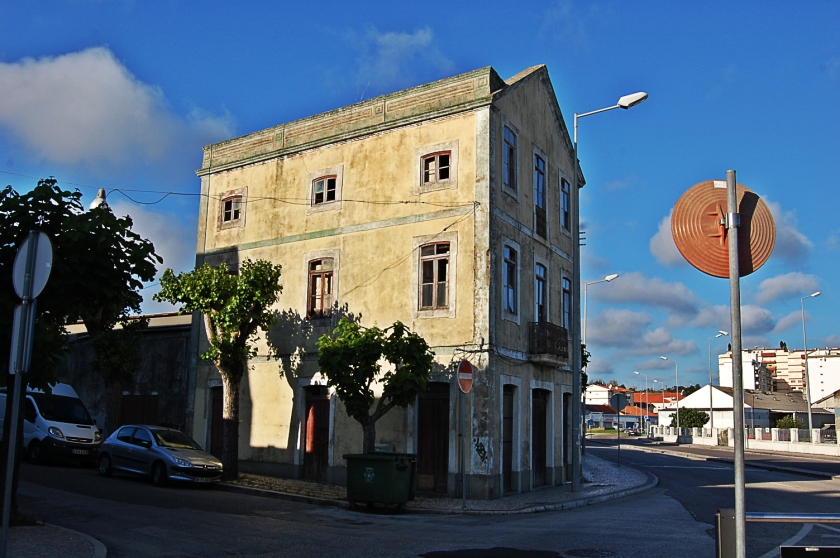 With my sandwich eaten and time winding down until my bus back to Lisbon, I had time to think about the weekend as a whole. One of the guys who was running the street food event had told us that 3 stalls had had to leave on the first day, as they had completely underestimated demand and sold out of everything. In spite of the quite remote location, it had turned out to be a really great event and, one can imagine, it would only get bigger for the second iteration in 2016. There is also a sister festival, with a lot of the same sellers, which takes place in Estoril, very close to Lisbon. Whichever venue, it’s a really nice day out and I’ll definitely be keeping an eye on next year’s program. You can find more information about the festival (in Portuguese) Street Food Fest.

And, just as I was about to close this adventure without seeing a single cat, I ran into this little beauty (left) and was then photobombed by his friend.

Save €15 on your first stay with booking.com

Get free credit when you sign-up at Air BnB

I'm a late-30s English language teacher and writer of dark fiction from the UK, living in Lisbon, Portugal. Ireally enjoy travel, both for the sake of the places I travel to and for the journey itself. I previously lived for 3 years in Poland where I tried to take the opportunity to see as much of Central Europe as I could.

Looking for something or somewhere specific?

Find me on Bloglovin’